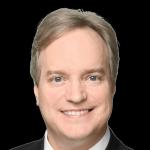 San Diego, California
John Thornburgh focuses on patent litigation, especially for computer-related cases (hardware and software) and medical devices. He regularly manages cases for clients large and small, providing guidance, strategy, and advocacy. Outstanding examples of his work include briefing and arguing the successful motion for judgment as a matter of law to overturn the $1.5 billion verdict in the Lucent v. Microsoft MP3 case, which established that Lucent does not own MP3 technology. He has also been a key player in precedent-setting cases such as Uniloc and Lucent, both of which set important new standards for patent damages. He argued another case to the Federal Circuit worth hundreds of millions of dollars, securing affirmance of noninfringement. In addition to representing large clients, he has led smaller clients to victory in "make or break" cases, such as atomic force microscope maker Asylum Research. He conducted the key technical depositions in that case, won summary judgment that four patents were not infringed, and then negotiated a settlement while the motion on the last patent was pending. As these examples illustrate, Mr. Thornburgh has significant experience managing cases, serving as primary client contact, seeking and opposing summary judgment, arguing in court, taking and defending depositions (including inventors and experts), examining witnesses at trial, participating in ADR, negotiating and drafting settlement agreements and licenses, and handling appeals. Forums where he has appeared include all Districts in California, the Eastern District of Texas, the Eastern District of Virginia, and Delaware. His practice also extends to international disputes; he has appeared in the ITC, conducted depositions abroad, served overseas clients like SAP, and worked a year at a law firm in Paris.