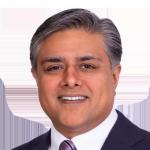 Washington, District of Columbia
Indranil ("Indy") Mukerji, is the Firm's Head of Tech Patent Litigation, and a partner in both the Litigation and Intellectual Property groups. With experience spanning more than two decades and 100+ patent cases, he is a trial lawyer who handles complex technical litigation in federal courts and tribunals around the country. In Court. Indy has represented a "who's-who" of the world's leading companies from North America, Asia, and Europe against competitors, non-practicing entities (NPEs), and patent assertion entities (PAEs) alike. His experience spans both jury and bench trials, and he has played key leadership roles in many of the highest profile patent cases of the past decade, vindicating clients from liability demands totaling into the billions of dollars. Along the way, Indy has led teams in courts nationwide (e.g., Texas, Delaware, California, Virginia, Massachusetts, Ohio, and Illinois) and in Section 337 proceedings before the International Trade Commission (ITC). He has also argued before the Court of Appeals for the Federal Circuit, and been deeply involved in some of the most significant patent appellate cases of recent years, including the Williamson v. Citrix Online case which was recognized as "Milestone Case of the Year" (2016) for its enormous impact on software patent law. Indy brings a practical, client-focused approach to litigating high-stakes cases, focusing on issues that matter, and working hard to simplify complex technical disputes. IAM Magazine has repeatedly recognized him among the ranks of its "Patent 1000 – The World's Leading Patent Professionals," noting that he "rightly pride[s] [himself] on [his] courtroom skills and ability to make what is complex simple. . . Unflinching when reputations and finances are on the line, [he] has mastered the art of persuasion," and that "Mukerji's tenacity and pragmatism have made disciples of many top technological companies." Chambers client feedback has noted his "deep strategic thinking," "excellent service in terms of understanding the client's business objectives," and "masterful command of patent litigation." Indy's cases have involved nearly every important aspect of computer and electrical hardware and software, including: semiconductors, microprocessors, mobile data (including LTE and 5G), operating systems, wireless networking, data storage, power (including lithium-ion batteries), memory/dynamic random access memory (DRAM), consumer electronics, enterprise security systems, network identity management, e-commerce, unified communications, and displays. He has also litigated cases involving a variety of other technologies, such as lithium ion batteries, insecticides, chemical compositions, oil & gas equipment, and medical devices. At the U.S. International Trade Commission. Indy has been involved in some of the most significant Section 337 investigations before the ITC in recent years, and brings his deep litigation and technical experience to bear on cases where clients face the supremely disruptive risk of having products excluded from the United States. As such, he is experienced with the critical issues involved in defending in such investigations, including the ITC-specific technical and economic domestic industry requirements. He is also one of the few lawyers who has appeared before the full panel of Commissioners at the ITC. In the Patent Office. With an engineering background, and as a registered patent attorney, Indy also has strategized division- and company-wide patent and IP portfolios for clients ranging in size from start-ups to global corporations. He brings that experience to bear in advising companies on the strategic nexus between prosecution, licensing and litigation, a nexus that is critically important in light of U.S. Patent and Trademark Office procedures such as inter partes reviews (IPRs) brought before the Patent Trial and Appeal Board (PTAB). He also has been involved in cases implicating various important technical standards, and is experienced in handling the unique issues that go along with litigating standards essential patents (SEPs). Indy has also led teams conducting the detailed IP diligence attendant to many corporate/private equity transactions. Diversity. The son of immigrants, Indy takes great pride in the strides being made to foster diversity in the legal profession, and makes time to help diverse attorneys succeed in practice. In 2011, the National Law Journal named Indy as the only patent litigator on its national "Minority 40 Under 40" list, and Lawyers of Color named him to its "Power 100" list of the nation's most influential minority attorneys for successive years (2014, 2015). Indy is fluent in English and Bengali.